Readers of this blog here might know by now that I also follow the blog beVegt. Both the editors are really into running, so I came across a few questions I wanted to send to Daniel, as he is also very fast and might just inspire other vegans or just sports interested people.
Interview in English here, german version can be read on the bottom of this blog. 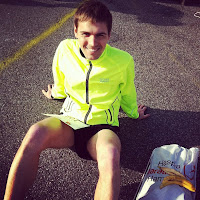 Hey Björn, I'm 29 years old, from Mainz, and currently live in Frankfurt - a city which I like very much. Since 2000 I'm an avid and by now also quite ambitious runner. My favorite distances are the half-marathon and the marathon, and now and then I also run an ultra-marathon. In 2011 I finished my very first ultratrail run, covering a distance of 67k, and in July I am facing my biggest challenge yet: the K78 Swiss Alpine Marathon in Davos.

Running has definitely become a passion of mine and is a high priority for me, roughly on a par with nutrition. I’m a vegan since August 2010 and on my blog "beVegt" I report on my experiences from these two areas.

2. How did you and girlfriend Kathrin get the idea of creating the blog beVegt?

Actually, to tell you how we started beVegt I have to tell you how I've become a vegan in the first place. I was searching a review for a hydration pack and Google sent me to Matt Frazier's blog "No Meat Athlete". I was intrigued by what I read there - I particularly remember an essay titled "Milk - it does a (baby cow's) body good" which stuck in my head and made me think about the whereabouts of the things we eat for the first time. The essay stated that man is the only mammal still drinking milk as an adult - and not even its own but the milk of other mammals.

I was curious and decided to go meat-free for only one month, just to give it a try and see how I felt. I also started to do some research on meat consumption and food production in general - read books, watched movies, discussed with other veggies on facebook and blogs. Before long, I realized that in order to be consistent I also had to eliminate eggs, milk and cheese from my diet. And that I did, together with my girlfriend Katrin, and since then we have never looked back.

After we had lived vegan for a year and really liked our new lifestyle and the feeling of freedom and integrity it gave us, we wanted to share our experiences with others. Being an athlete on a vegan diet is possible, no matter if you are a beginner or a veteran. Unfortunately, if you only speak German you won’t find much information on this topic on the internet. With our blog “beVegt” we want to change that. We love what Matt Frazier does on “No Meat Athlete” so our approach is somewhat similar - we are not pushy at all but try to show our readers that you can lead an active, healthy and fulfilling life without animal products.

3. I have read on your blog that your move to veganism has also bettered your running. In how far did it change?

I really feel that I need much less time for recovery after a hard workout or a race. In early June I ran the “Brüder Grimm Lauf” - a 82k stage race with some steep climbs and downhill sections from Hanau to Steinau. Both Katrin and I ranked better from stage to stage and in the later stages we were faster than some runners who would most likely have beaten us at shorter distances.

However, I am cautious when it comes to attributing athletic improvement to a vegan diet. It is a bit of a hype in the veggie scene right now: "Eat plants and you will be super-strong". But there are so many other variables influencing athletic performance - training and sleep to name just two - and we mustn’t forget that almost all world-class athletes are not vegan. That said, you might as well argue the other way round: Haile Gebrselassie and Usain Bolt eat meat, so meat increases athletic performance. I think that we have to be very careful with this. I am an ethical vegan, I don’t consume animal products because I don’t want other creatures to suffer for my pleasures. The fact that my plant-based diet does in no way hamper my ambitions as an athlete is rather a nice bonus.

4. What are your current personal best times, and how were your best times before going vegan?

My current marathon personal best is 2:59:49 (previously 3:01:25), my half-marathon personal best is 1:21:53 (previously 1:24:19). At first glance this doesn’t look like a huge improvement, but I'm now working a full time job - in my pre-vegan life as a student I had considerably more time to train and relax than I have now. From this perspective I’m very pleased with my progress and this fall I want to increase my mileage again and try to become even faster. Right now I’m dreaming of a sub-2:50-marathon. I'm sure I can do this and will probably give it a try at the Boston Marathon in 2013.

5. Do you have special tips for before, during or after a run? What is your favorite recipe?

Some time ago Katrin wrote an article on sports nutrition for beVegt adressing exactly those questions: how and what should you eat before, during and after a workout or race. I think when it comes to sports nutrition the most important thing is to take in a good amount of carbs, protein and fluid in the first half hour after you have finished your workout. In those 30 minutes the body can absorb these nutrients better than at any other time. Many athletes neglect post-workout nutrition and will take a shower before they think of eating and filling up their depleted body, but it is absolutely essential for quick recovery!

And my favorite recipe? I like simple dishes from the Indian and Asian cuisine, with rice or quinoa as a basis, plus a lot of vegetables and spices like curry or garam masala. An all-time favorite in our kitchen is "A Grain A Green And A Bean" - This formula combines all the essential nutrients and leaves much room for creativity. As the name suggests, it consists of a whole grain such as rice, quinoa, bulgur, a green leafy vegetable like spinach, kale or broccoli and a legume such as beans or lentils. Complex carbohydrates, protein, iron, calcium - it gives you everything you need as an athlete and you can season it to taste.

6. What does a perfect day look like for you and what is your perfect vacation?

For me, a day cannot be perfect without a nice and decent workout giving me the possibility to relax and feel my body. Add to that a visit to our local whole foods market, preparing a delicious vegan meal with fresh ingredients and enjoying it in the shade on our balcony ... I do not need much more to be happy.

When I’m on vacation I like to be in nature - of which we unfortunately don’t have too much here in the Rhine-Main area. On this year’s summer vacation we will go to the Alps for hiking and then to Davos in Switzerland to run the Swiss Alpine Marathon. A pretty perfect holiday if you ask me ...

7. What goals do you want to pursue in life sportswise but also for your life in general? 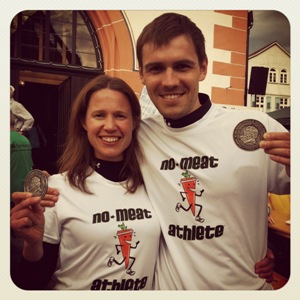 As to my goals as an athlete, I would really like to go on setting new personal bests in road races for a few years, yet on the other hand I also want to become a decent ultramarathon runner. A major goal of mine is the North Face Ultra Trail du Mont Blanc - an ultratrail run around the Mont Blanc massif for a total of 168k and almost 10,000 meters of vertical climb. I learned about the ultratrail for the first time when I circled Mont Blanc via mountain bike 6 years ago - since then I have wanted to finish this race at least once in my lifetime.

Apart from running, I try to be content with little and to leave as small a footprint as possible through my lifestyle. And of course I am happy whenever I can motivate people to start running or to pay more attention to the things they put on their plates.

Thanks Daniel for the inspiring words!!!


The last weekend was spent in Berlin.
Berlin, as Germanys capital, might also be the uncrowned Veggie-capital-city.
My band had been booked for a show with H2O.

We were lucky enough to have a friend who plays in Final Prayer to put us on the bill. Thanks Flo! So some of us took the opportunity to visit Berlin little earlier. We checked some vegan spots, I have done a triathlon and hung out with my friend Björn Moschinski and his girlfriend Sandra.
So yeah... we got there on saturday evening and went to Björns restaurant "Kopps" in Berlin-Mitte.

We also went to Sfizy and found it was delicious and cheap considering the huge pizzas we have gotten. 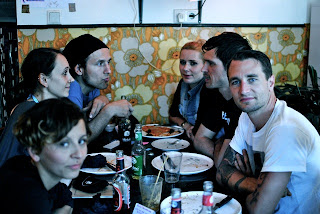 This pic was taken on sunday after I have done the olympic triathlon in Storkow, which was only 60km out of Berlin.

We also went to Coretex-Records on monday where this nice photo had been taken!

Oh well... we will also play this show on August 4th and it is gonna be a blast!

right before the next Triathlon of the season in Sassenberg.

German version of the interview with Daniel Roth:

VGNSETRI
I am a 31 years old SXE Hardcore kid who loves sports and challenging my own body and mind.